I had thought I had put this essay up online, but a cursory search finds nothing, and so in response to this blog post, I thought I'd throw this out for you all to read.

The Stars Shine Bright North of the 49th

It may once have been possible to settle on a definition of Canadian SF and fantasy, but with the number and diversity of Canadian genre authors such generalization is no longer feasible. There was a day when people claimed they could tell a Canadian author from an American or Brit just by the style, even more by how the story ended, but this seems unlikely now. A case could be made, I suppose, for what I once called (way back at the Winnipeg WorldCon) the New Internationalization of SF. Not so New now, of course, but bear with me here. We really do live in a global village, wired and tapped in to each other in ways that the best of our field couldn’t imagine short decades ago.

I submit that there is no country, at least one not under the boot heel of military occupation, that is more susceptible to every shake and shimmy of its neighbour (note the Canadian spelling) than . The neighbour is, of course, the , hereafter referred to as . No nation is nearly as profligate in its spreading of political views and cultural productions as , and since my country imports as much of this as possible via cable TV, the web, and NAFTA (all across a largely undefended border), we Canadian mice are consistently affected by the extravagance of the American elephants.

Since and also share a common language (mostly, since much of is a whole ‘nother ball of wax), it stands to reason that many around the world would view us as interchangeable, or at least not terribly dissimilar (although perhaps not politically). The thing is, though, I’ve found over the past few years that one of the key definitions Canadians give themselves is by virtue of what they are not: American.

In a delicious dose of timid Canadian irony, however, not only Canadian authors who live in Canada are defined as Canadian: Geoff Ryman, John Clute, Cory Doctorow, S.M. Stirling, even myself for a short period of time, all of us live or have lived in another country, and each one of us steadfastly remains at least partly Canadian. If we refused, of course, the Canada Council has goons they pay to come ’round and tattoo a maple leaf to the left butt cheek, so the decision remains an easy one.

Canadians also embrace as their own writers who move here from other, invariably warmer, countries: William Gibson, Spider Robinson, Nalo Hopkinson, Dave Duncan and Élisabeth Vonarburg are members of the club. Even better, authors who were born elsewhere, moved here, and then moved elsewhere again are still considered Canadian, and so Sean Stewart will forever be trapped, like a mosquito in fossilized maple syrup.

This overwhelming inclusiveness is a typical Canadian response, a reaction to the fact that our neighbour is ten times our size, money and clout and personality all equally outsized. But the Big Tent has done something to the shy little beaver, I think, reduced (not wholly removed, though) its inferiority complex and showed it a way to present its own special self to the world.

And here’s the thing: turns out, the world is interested.

By golly, we can write about things and places that at one time we would have dismissed as too jingoistic. Even better, we don’t have to. After years of angst and almost terminal timidity, we’ve discovered that a Good Writer is a Good Writer, something that I suspect many editors and readers already knew. Yes, there’s a common belief that strong, individualistic characters are American and ambiguous endings are the property of what we call CanLit, and like any myth there’s probably a grain of truth to this. I would submit, though, that Canadians suffer from our own special propensity to individualism, or perhaps that Americans have found the wonders of ambiguity in equal proportions.

The borders have opened and we cross them freely these days. Not political borders, though, and none of this New Internationalization bunk. These are borders of the mind and imagination I’m talking about. The days where we Canucks worried we’d be ignored if we wrote about what was important to us are long past, and now we find that we have much to offer an interested world.

Stepping Back Up to the Plate

Well, John Scalzi has decided to run as a write-in candidate for president of SFWA. My term as Canadian Regional Director is almost up, and I was prepared to let it all float away, but then some folks came to me and asked me to run for VP. The problem was, it was too late to make the ballot.

But John's right; the candidates for pres and VP are good people, but I don't think they're right for the SFWA of the future that I want to see right now. And so I'm going to piggyback on John's announcement right now and tell you all that I'm offering my name as a write-in candidate for vice president of SFWA. My platform, as written and presented to some folks last month before this all seemed to fall apart, is below:

I've done my best to serve SFWA over the past, as Canadian Regional Director (a stint of which I'm done with as of this coming election), as Chair of the Publicity Committee, and probably more that I'm not remembering right now. As my time as CRD has been rolling to a close, I have put a fair amount of thought into whether or not I can do anything else for my fellow authors, and whether or not now is the time to do so.

I believe I can and should. Whether or not it is now is up to you.

I'll spare you all the platitudes about what problems face us as authors. I will tell you that I'm a firm believer in copyright, but that copyright as it exists right now is broken. The creator should have firm control over what is done with his or her work, and that means that SFWA should be involved in processes that help the individual author - not the publisher/corporate entity that, frankly, has enough money and clout to swing its weight around without our help. I believe that it will be important for authors to embrace new digital platforms, that Digital Rights Management (DRM) is a very bad idea, but I'm also aware that at this time the membership of SFWA is remarkably divided on how to approach electronic publishing. With that in mind, how can we educate others when we can't agree on what the teachings are to be? I propose that, while we do not disband the e-piracy committee, we do change the name. Piracy is a loaded word, one that has different connotations for different people. But I also believe that we should be professional authors, writers who are paid for the work we do. Beyond that, I'm open to discussion, and I believe that there are many members whose voices in this matter have not been heard, but need to be.

We need to follow through on the audit program, especially the current and very important audit of Wizards of the Coast/Hasbro. We also need to do something about the disaffection that many of our members are feeling these days, something that needs to be done without turning us into a miniature version of a nanny state. And yes, that means I don't approve of SFWA's Code of Conduct.

For those of you who don't know me: I've been a member of SFWA since the early 1990s. I've had over two dozen short stories published in a variety of markets, and one collection out from a small press. I have a novel making the rounds, but I'll spare you the sob story. I'm a former editor with Canadian small press magazine On Spec, where I also spent a term as Art Director. And yeah, I'm Canadian, but I lived in the US for a short period of time, which in the long run probably doesn't mean anything, but perhaps you'll indulge me.

In this case, that would be methane seas on Titan and a remarkably depressing outlook (yes, even more depressing than many might think) Iraq.

Aidan, Opening Up a Science Fair-Sized Can of Whupass 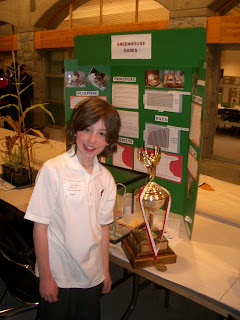 Yes, that would be my son with a gold medal and a slightly more ostentatious item, the Ministry of Environment - Environment Award (Special). The trophy stays with the school for the year, but he received a suitable-for-framing certificate as well as a $50 gift certificate for Books and Company.

Been fighting illness all week, so things have been quiet. However, I have managed to get another roll finished and developed, and so I present to you three more weeks of photos from Moore's Meadow.