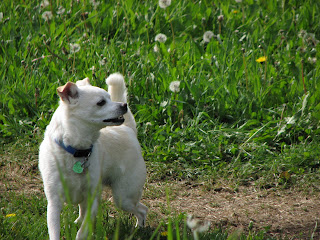 Including a shot of Smokey, who apparently has seen or smelled something of interest. 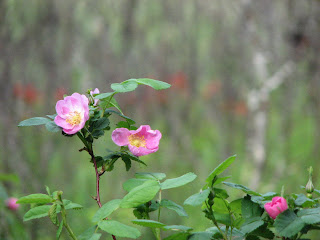 (As a reminder, remember that you can click on the photo to see a larger version.) 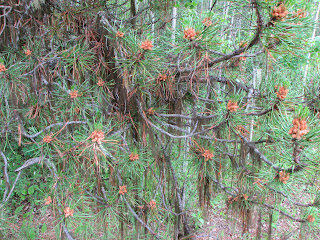 Proof That Moore's Meadow Can Be in Colour 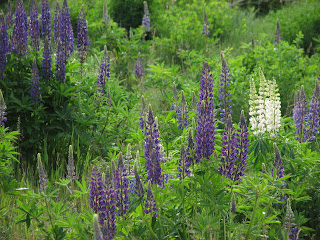 So I got a new camera for Father's Day, a digital Canon S3 IS, picked up for a song because it's being discontinued and replaced with something that has higher megapixelage 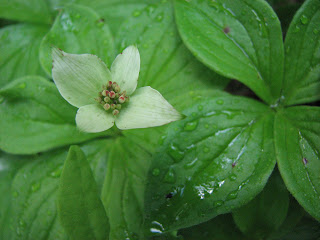 . It's no SLR, but I'm very happy with the results of my simple experiments so far, and thought I'd share a few of them in this and an additional post.

Obviously I had the Holga with me as well, and that was my (if you'll pardon the expression) focus for the walk, but having this camera with me changed my perspective; I ended up looking for colour and B&W, for zzom and macro as well as the simple standard lens of the Holga. As a bonus, I drove the dog crazy with all my meandering and stopping. 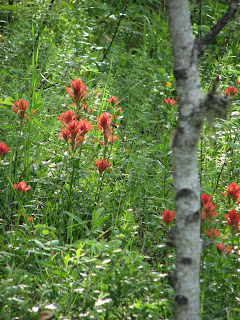 I have four more pictures at Flickr, for a total of 19 weeks gone. Two more weeks are in the camera, but two more weeks will probably be shot before I get it developed.

Greetings From the Murphy Hacienda 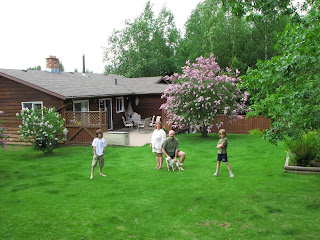 The clouds moved in (and so did the wind), but I wanted to get a shot of us in the backyard before we lost all the lilacs. This shot is from the hill up in the back right corner (as you face ou the back door) of the yard, looking down onto the main expanse of the yard. Beyond the big lilac tree is another slope that leads down to the far fence. I'll do a photo tour of the whole place soon, since you can't see the wildflowers and other features from this angle.

As some folks here may recall, my collection Wasps at the Speed of Sound was released in 2005. A little later down the road, I was asked by someone on the Sunburst Award committee to sit as a judge for 2006. Owing to not having anything explained to me at the time, I accepted, and afterward discovered that "2006" meant I would be judging books released in 2005. Alternatives were presented:

Option #2 was never a consideration for me. I thought seriously about #1, primarily because I was more than a little pissed off that things weren't clearly presented to me. But I was subjected to some begging and pleading, mainly involving me being irreplaceable (and by this I mean that the committee felt they wouldn't be able to find another judge, not that Derryl Murphy was the only guy for the job).

And so #3 was it. I didn't come up with that one, but was told it would happen. And what the hell, I figured, it meant I wouldn't have to compete against Holly (last year's winner), although I knew it meant I would be up against Peter Watts. And sure enough, it's great to see that Blindsight is a finalist this year. Indeed, if I were a judge this year I would have wanted his book on the shortlist.

Well, I didn't make the shortlist this year. No harm, no foul, I say. Each year there are plenty of terrific books released, and I didn't write the damned stories with an idea to winning prizes. Curious, though, I clicked over to see the list of books that had been considered for this year's prize.

I'm not sure why this should take me by surprise, considering the gong show scenario I was presented with when I was first asked to be a judge. And I shouldn't let it bother me, since it's an award I was pretty sure I didn't stand a chance of winning, to say nothing of the fact that awards are really not that big a deal to me (I'll be the first to admit to the mercenary belief that $1000 would mean something, though). However, I am somewhat of the mind that a promise made should be a promise kept. My editor sent five copies of the book to the committee, and if I'm in a generous frame of mind, those books are languishing in a box somewhere.

When (if) my next book comes out, I'll be curious to see what my mindset is at that time, if I'm willing to trust to the process again. Certainly any future goodwill regarding being a judge again has been burned beyond all recognition (perhaps for other awards as well), as has any inclination to contribute to fundraising for the Sunburst.