A New Book in My Future

No, it isn't Napier's Bones. Bill Shunn, current Hugo and recent Nebula nominee, is my co-author on "Cast a Cold Eye," a novella which is due to be published as a stand-alone book in Spring/Summer 2009 (yes, you read that date right) by PS Publishing.

The story is about Luke Bryant, a young teen in the early 1920's who lost both his parents to the Spanish flu, and whose uncle loans him out as cheap labour to a traveling spirit photographer, Annabelle Tupper. It's a ghost story, of a sort, and we're both quite proud of it. Better yet, we only had to suffer through 1.5* rejections before it sold.

* I won't mention where the full value rejection came from, but Ellen Datlow had asked to look at it (and had really nice words for it) even though she had no current project, and another press elected not to even give it a read. So, 0.25 for each, arbitrarily.

Some Photos From the Trip

I've taken these shots over to Picasa's web album instead of Flickr, partly as a test to see what the site is capable of. So far I'm fairly satisfied. Have a boo and tell me what you think.

More pictures will come, as I pick through the 530+ I took over the past 12 days.

Addendum: I've added three shots that were taken with the camera's stitch mode. It allows me to take multiple pictures side by side and then puts them together into a panorama. Not perfect, but pretty damned good considering how automated it is.

From PG to Surrey to Portland, then along the Columbia Gorge, to Cannon Beach via Tillamook and Cape Meares, to Seattle, and then to Edmonton via Dry Falls Gorge to Cranbrook, then the next day through Turner Valley (where I was pulled over and warned about excessive speed by a police officer - oops). Some photos will soon follow, along with more details.

You've got to remember that these are just simple farmers. These are people of the land... the common clay of the New West. You know: morons.*

Still on vacation, although we're attempting to relax in Edmonton for a few days rather than drive madly from one location to the other through Oregon and Washington (although it was fun, and I will post more about that part of the trip anon). But I just thought I'd mention that there is almost nothing more infuriating than sitting down for a nice meal in a pleasant little town in Washington and finding yourself trapped beside a table hosting a Republican Hen Party. Somehow, though, Jo managed to convince me to keep my trap shut.

We're off tomorrow for a week in Washington and Oregon, and then on to Edmonton for close to another week. I may post from out on the road, perhaps even a picture or two. Or, I may not.

I Wish My Name Was Steve 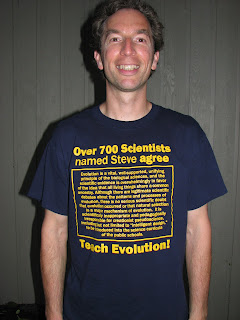 Dr. Stephen Rader, professor of biochemistry and RNA wizard at UNBC, models his new shirt from the National Center for Science Education. For those of you who can't click and enlarge, the words in the box say "Evolution is a vital, well-supported, unifying principal of the biological sciences, and the scientific evidence is overwhelmingly in favor of the idea that all living things share a common ancestry. Although there are legitimate scientific debates about the patterns and processes of evolution, there is no serious scientific doubt that evolution occurred or that natural selection is a major mechanism of evolution. It is scientifically inappropriate and pedagogically irresponsible for creationist pseudoscience, including but not limited to 'intelligent design,' to be introduced into the science curricula of the public schools."

The back of the shirt, besides listing our model Stephen, notes that it is in memoriam of that very famous Steve the Scientist, Stephen Jay Gould.

I wonder if they could buy some billboard space across the street from the various creation "science" museums that keep springing up? 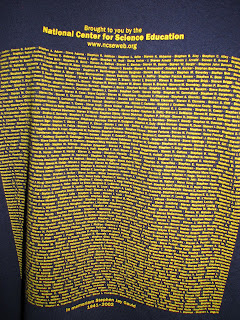