Have I mentioned that the movie theatre situation here in Prince George is several levels below atrocious? We have one teenagerplex with a grand total of 6 screens, all of those screens devoted to whatever movies the geniuses in Toronto think will be successful. Obviously, sometimes they're right, but some other times they have to scramble and bring in a film that surprises everyone. In those cases, we get it late, and it's guaranteed not to last, since other films are scheduled and can't be bumped. At other times, they stick with the poor performer come hell or high water, meaning that movies that do moderately well don't show up.

And so, as much as I liked it, we're still sitting on The Golden Compass, which so far has only done about $58 million in business (domestic), and we will likely never see No Country for Old Men, which is sitting at about $41 million. We also had a period of about 2 weeks last spring where our only choice was Spiders of the Shrekkibean.

Even when there are movies here for me to see, a babysitter has to be procured and paid for and time has to be found, unless of course it's a movie the boys are going to see as well. Luckily, we have a decent enough home theatre setup, although that means that some of the movies I'm about to mention were officially released in 2006. But if I saw it in 07, that's when it counts for me.

I'm not as good as Randy at keeping track of every film I've seen in the year (or at least, he was. I don't know if he still keeps tabs). But I'm going to try to run through the films that I saw this year, or at the very least the ones that I enjoyed. This is not a "best of" list for the year, since I obviously didn't see everything that came out. It is a glimpse at what I enjoyed, though (along with a couple of dogs).

For those of you who are curious, I used the numbers from WorldwideBoxOffice.com for 2006-2007, then listed the movies I saw from most money to least. If I remember seeing it in 06, it ain't here.

Pirates of the Caribbean: At World's End - Awful, wretched, not at all fun, a confused mishmash that held my attention not at all.

Harry Potter and the Order of the Phoenix - Quite good. Not the best of the lot, but nice and dark and Harry is turning into a surly teenager quite nicely.

Spider-Man 3 - Not as atrocious as Pirates, but it sure wasn't good. Especially cringe-worthy was Peter's little dance down the streets of Manhattan after he'd turned evil.

Ratatouille - I'm a die-hard Brad Bird fan (he also directed The Iron Giant and The Incredibles) and he didn't let me down here. I felt good after watching this.

The Simpsons Movie - I enjoyed it, but I don't feel the urge to own the DVD.

300 - Gorgeous to look at, but only the battle scenes held my interest. Meh.

The Bourne Ultimatum - I loved this movie. Hyperkinetic and exhausting to watch, with a fight scene that, for a short while, I thought was the best I'd ever seen.

Ocean's Thirteen - Better than 12, not as good as 11. Fun and minor and nice to see Ellen Barkin.

The Golden Compass - Better than I'd hoped, not as good as I would have liked. The director, I fear, got stuck with a chickenshit studio decision that they didn't want the film to be too long, and so it suffered from a bit of jumpiness as it cut from scene to scene, trying to race through a dense and wonderful novel in less than 2 hours.

I Am Legend - Pretty good opening 2/3, awful final 1/3. Plus, the Dark Seekers look like Bat Boy.

Blood Diamond - I'm an Ed Zwick fan, and he didn't let me me down. Disturbing, thrilling, well-acted.

Knocked Up - My third-favorite comedy of the year.

Meet the Robinsons - Good, silly fun, with enough jokes for the parents to enjoy to make it worthwhile.

Enchanted - One of my five faves of the year. Amy Adams deserves an Oscar nod for her role as the princess.

Stardust - Good fun, and nice to see a Neil Gaiman book get intelligent treatment on the screen.

Superbad - My second-favorite comedy of the year. Filthy sweet.

Hairspray - My second favorite musical of the year, and likely the boys' favorite movie.

Bridge to Terabithia - Another one that was better than I expected, and it contained the most heart-wrenching moment of any film this year.

Shooter - A decent enough thriller, even if it is an odd follow-up to The Departed for Mark Wahlberg.

Disturbia - Another decent thriller, although it gets a tad obvious as time goes on.

Hot Fuzz - My favorite movie this year. Saw it in the theatre in Edmonton and had trouble breathing I was laughing so hard.

Surf's Up - A fun animated mockumentary. It wraps up a bit too neatly, but still well done.

Smokin' Aces - I made the mistake of renting this shortly after the Virginia Tech massacre, where the son of a friend was murdered. I was disgusted with myself for at least a week.

Flags of Our Fathers - Good, but I suspect I have to break down and see Letters From Iwo Jima to complete the moment.

28 Weeks Later - A few kicks in the gut from this one. They weren't afraid to go very dark.

Mr. Brooks - Even playing a serial killer, Kevin Costner (with William Hurt's freaky help) is likable. Which was the point, I suspect.

The Lives of Others - German film, one of my top five of the year.

The Last Mimzy - Enjoyable, if forgettable. Until I saw it on the list, I'd forgotten I'd seen it.

Waitress - Another of my faves for the year. Keri Russell is a revelation, and there is a bittersweet sensation from knowing that Adrienne Shelley was murdered shortly after completing the film.

Eastern Promises - Best fight scene of the year. Ladies, Viggo is nude for it.

Volver - Starring Penelope Cruz and her boobs! How can you lose?

The Astronaut Farmer - Good, but it almost lost me when he had his misfire and yet lived to try again.

*Missed one: Fido - A good way to end the zombie craze, I think. Moving and funny and a nice nod to the Technicolor dreams of 1950s Hollywood.

There were more, I think, but I'll leave it on a high note. Happy New Year, all.

If you buy a slot car racing track for the boys for Christmas, and the outside packaging does not tell you the total area the track takes but does admit that there are "64.8 feet of racing action," assume that it will take a long time to set up and that it will eat up a good chunk of your basement floor. 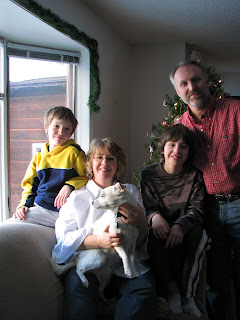 A Good Place to Stick a Few Dollars

It's not often you come across a charity where 100% (well, as close to 100% as possible, allowing for mailing costs and other very minor incidentals) of your donation goes to where the money belongs, rather than to paying for offices and utilities and, worst of all, salaries. But I have one here for you, along with my personal recommendation that, if you want to throw some money to a good cause, this is a good place to go.

It's called the Northern Uganda Development Foundation, and is run by my friend Chris Opio, a professor here at UNBC. To quote a portion from their web site, the NUDF first consults "individual villages and depending on the needs of the village [they] endeavor to supply locally sustainable, clean and safe drinking water, farming practices, health education, small business enterprise and technology.

I don't know if the PayPal feature works (they use an email, rather than a button, and I just handed over money in person), and I'm pretty sure there is no tax deduction here, but a smaller amount of money goes further, remember, and you can always email if you're having a problem sending money.

So? What are you waiting for? Go help do some good. You can pretend you're buddies with Bono or Clooney.

When I was at WFC I did a last-minute reading from "Cast a Cold Eye," and said reading was recorded by Cliff Samuels, a committee member for next year's WFC in Calgary. You can download the podcast here, and find my reading starting at about 14:22. A tad rushed, I think, probably because I was so out of sorts with how I was handled. But still and all, you get a sneak peak at some of the book before it's released.

"I'm not going to belong to a party that doesn't want me." Way to stand up for your idiotic principles, man.