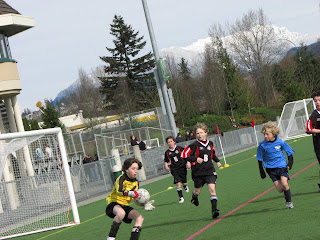 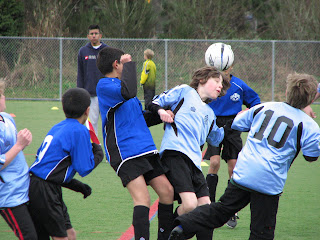 Aidan's team went to Burnaby this past weekend and played against teams that are just finishing their seasons (as opposed to our boys, who before the weekend had managed to have two practice games against a girls' team). They lost 8-0, 8-2, and 11-1. I should also note that the team is a U12, as in no one on the team can be any older than 12 this calendar year. Aidan and one other boy on this team both turn 12 this year, but the rest of the team are turning 10 or 11. For the most part, that wasn't the case with the other teams; yes, they grow them big down there, but they also have a bigger population to choose from.

The tournament was hosted by the South Burnaby Metro Club, and we ended up playing the host team in the 8-2 game. They were good kids with a fair coach, and the second half was actually a 2-2 draw. Could have been worse, but I think they were surprised the boys fought back. Aidan had one glorious chance just go over the crossbar, and another got stopped by the keeper reaching way out, but the rebound fell to our smallest player and he popped it in.

The first game, when Aidan played goal, was a bit more problematic. I thought the coach was fair, but the kids were overly rough (their coach actually pulled one of his boys off when the ref did nothing - more on the refs later), especially considering the size difference. Aidan, like his friend and fellow keeper Jordy in the second game, managed to keep it much closer than it could have been, with saves coming out of the blue. He let in a couple of stinkers, too, but he knows that the best pros do the same, so it's never a reason to feel down. The third game a different boy played in net, and while he's a good athlete, he's not been trained in the nuances of the game and how to properly play that position. He did start to get down on himself, but the other boys are remarkably fair-minded and I think worked very hard to keep his spirits up.

The fields were abominable. It was outdoor artificial turf, and the little fake grass blades rubbed off on everything. During lunch after the first game Aidan had it constantly dropping in his food. My shoes were a good half-inch thicker from the stuff piling up when I was working as a linesman (and again, more on that soon), and during the second game Jordy kept having to run to his mom to get his face wiped, and he was sneezing like mad. They also played on a full size field cut in two, with small pylons marking where the goalie boxes were. And Aidan still has a nasty rug burn on his thigh from sliding to make a save.

And now the reffing. The boys were drilled on rules that were new (or else previously enforced in a more mild manner) for the young ones, and they did admirably in the face 0f it all: offside was to be called, if the keeper had the ball you couldn't go digging in hard, don't knock down opposing players, no high kicks, don't jump in front of the keeper when he's drop-kicking, keep your hands off the ball, if a player is injured rely on the ref to call the play dead. Perhaps not surprisingly, there was none or little of that bothered with.

The refs appeared to be surly teens or young adults, not wearing proper kit (uniforms), and the first one didn't even bring a whistle. There were no referee's assistants, so they looked for volunteers to work to sidelines, which I did for the first two games. In that case, the position is considered a "club linesman," and that person is only allowed to call out of bounds. No offside, no infractions, not that they took the time to explain that to anyone. Now, perhaps this wouldn't be so bad if the ref actually kept up with the game, but in all three matches he was out for a casual stroll and quite happy to miss all sorts of things. In fact, everyone assumed after the first game that there were no offside calls being made. At half time of the second game I went to the ref to ask him about that, since the other club linesman had tried to call our boys offside (which they were, but only in reaction), and he somewhat surprisingly assured me that he was calling it. Which he did, a couple of times in the second half. Probably 1 in 4 goals were scored against us from an offside play, as well as another when one of our players was fouled and hurt and nothing was done about it until after the goal.

It pains me to see kids have to deal with this. I worry they're going to get jaded about the quality of the officiating and the state of their own games. So far, happily, they seem okay. They knew they were going to be schooled on the weekend, and they were happy with the fact they weren't always shut out. I just hope the next two tournaments see more attention paid to making it fair for all.

(Pictures above: Aidan making a save - taken by Brennan, which explains the acute angle, and Aidan heading on a ball to safety from in front of his own net)

Me, Talking About YA SF

Follow the link to SF Signal, with this week's Mind Meld, and see not just what I have to say, but also Ellen Datlow, Steven Gould, and others. 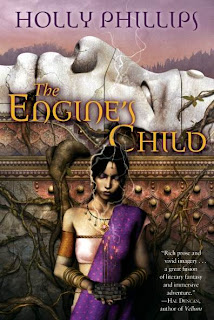 Here it is, the cover for The Engine's Child, which is to be released in time for WFC in Calgary. Holly tells me she's having her own website (finally!) built, but for the moment I'm her window to the virtual world.

The Latest From the Natural World

Let's see: first, I see that the Alberta government has decided that wolves should be killed in order to save the elk and moose and deer that are having trouble because of habitat loss.

Did the Japanese take a shot at Paul Watson? They say no, but then again, they insist that what they do they do for science, even if they quite brazenly kill whatever happens to be in range.

The big one, of course, is that James Lovelock quite cheerfully believes that the human race will be reduced by about 80% by the year 2100, and that we'll be lucky if we'll have 20 years before "it hits the fan." Of course, he likely won't be here then. Me, I likely don't disagree with him, but I sure need to try to stave off the inevitable.

Same As It Ever Was

I remember growing up, my dad complaining that Albertans would elect a fire hydrant if it ran for the Tory party. That complaint still stands, I think.