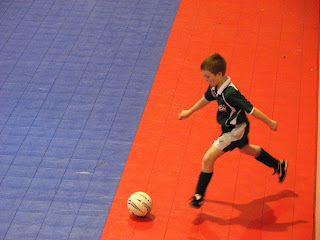 Brennan, playing on the hard court.

First, we need to trust our science

My friend Kim Stanley Robinson on what changes we need to make to avoid the oncoming tragedy of climate change, in the excellently-titled article "Time to end the multigenerational Ponzi scheme." This is well worth reading.

Letter to the Editor

So, the local rag, the Saskatoon Star Phoenix, has a columnist by the name of Bronwyn Eyre, who, like columnists in many other places, likes to babble on about many things without really knowing what she's talking about. There's this belief that an opinion can be held without having any solid base for those opinions. Facts? Don't need 'em. Instead, listen to half-truths and bizarre rumours that show up on the web and treat them like the real honest truth because, honestly, they wouldn't be false with so many people repeating them, would they?

The other day Ms. Eyre wrote a column titled "Freedom of Speech Slippery Soapbox," which bounced all over the place. It irritated me, but letters to the editor are limited in how many words they can contain, so I had to pick and choose my targets. My letter focused on her unquestioning belief in the rightness of Ben Stein, as well as a brief blurb about a literary festival. Happily, another letter appeared the other day that looked at another fallacy Eyre repeats.

This sort of thing drives me nuts, of course. But equally clearly, it won't stop people like Eyre from carrying on spouting all sorts of nonsense, nor papers like the Star Phoenix from happily publishing it.