I see I've had a few hits today, people coming from John Scalzi's platform for SFWA President, when he and I unsuccessfully ran on write-in campaigns, me for VP. The reason, I suspect, can be best found in Cory Doctorow's post at BoingBoing.

By the time I stumbled across the fuss in one of the SFWA private areas on SFF Net, 200+ messages had accrued, a lot of them remarkably obtuse, at least one individual yelling loudly over the tops of everyones' heads, doing his usual best to ignore whatever was said. Even if I didn't feel I was coming late to the party, it was frustrating enough that I just didn't bother to post my own thoughts.

However, as I'm currently the President of SF Canada (obviously a much smaller organization), I figure it probably makes sense to have an opinion on this. In a letter to members of SFC, I told them that I personally agree with Cory when he says "When SFWA begins to muddy the waters by asserting that the organization is its members' representative for copyright, they make it harder for actual copyright enforcement agents to do their job..." Beyond that, I've asked the members for input on their own personal beliefs on how and where their own work should appear electronically.

I'd like for all of us to be on the same page, but I understand that this is impossible. What is possible is that SFC not descend into the lunacy that consistently strikes SFWA, especially when certain people get it in their heads that they know what's best for the rest of us.

Another Marvelous Example of Christian Love

Fred Clark at Slacktivist (himself an evangelical) points out a head-spinning effort by an American baptist pastor to pray for the deaths of their enemies in Americans United for the Separation of Church and State. The post wanders elsewhere, but it's all worthwhile. I especially like the suggestion by Fred that he'd "love to see Mr. Learing file a lawsuit against Wiley and his church. All they'd need to do to defend themselves would be to explain that they don't really believe in the efficacy of prayer."

A Good Example of Why I No Longer Believe

Because I just can't wrap my head around twisted logic like this. To think that this woman would be even nicer when there are plenty of so-called Christians who don't fit that bill sells the neighbor short and underestimates human ability to be a jerk no matter what motivates us. And of course, the letter writer's world view opened for a brief, confusing moment, but has probably been successfully shut down again. 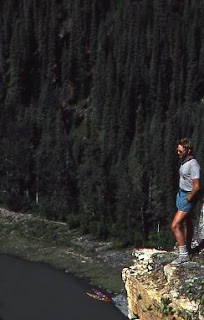 I was going to go in the order the book had these things listed, but the news yesterday that Canadian Prime Minister Stephen Harper is going to more than double the size of Nahanni National Park Reserve bumped this one up the line. It's now over 10,000 square kilometers, although the recommendations that it needs 30,000 extra protected and the temporary protection of 18,000 makes the move look someone small. However, I'm not one to look a gift park in the mouth, and this is certainly a good start.

The Nahanni is an amazing river, coupled with a magnificent waterfall and a canyon that, at some points, is deeper than the Grand Canyon. When we flew in we took a 1950s era Beaver airplane (complete with repaired bullet holes in the wings from when it flew somewhere in North Africa during a civil war) and landed on Rabbitkettle Lake. There we portaged to the river and then put together the canoes, which were 29-foot Voyageur-style canoes that had to be bolted and caulked together before launching.

The first day was 12 hours of paddling, due to the weather holding us back from flying in on time. My arms have never been so sore. The next few days were a wonder of early mornings with the sun shining into my tent at 3:30, orchids in the bush, mosquitoes by the trillion (including a brilliantly funny scene where one of our number headed into the woods to take a dump, running back screaming for us to launch the canoes and he would catch up, with his pants still down at knee level, swatting at his ass and skin beginning to pale from the blood loss), tufa mounds, bears and other wildlife alongside the river, and let's not forget running the rapids.

This is a place that deserves to be on the list, more so for those lucky enough to be able to do the river, rather than just flying in to have a boo at the falls. There are places I've seen in my life that I'll always remember: the Nahanni ranks right near the top.

The End of an Entire Evolutionary Line

Not just a species, an entire line. Scientists have declared the Yangtze river dolphin to be officially extinct. Be sure to click on the photo gallery at the bottom for a look at some other endangered species from the river, as well as picture number three, which is a stunner.

Wikipedia has a decent article about the Baiji, as it is locally known. Note that the species was up to 25 million years old, and that it's the first aquatic mammal we've forced into extinction since the 1950s. What the articles don't note, though, is that it is accepted practice for a species not to be declared officially extinct for a longer period of time than was allotted here. My memory may be faulty, but it could be as long as 50 years, which means that the animal can not have been spotted for that length of time for it to be removed from functional extinction status. For this animal to be declared extinct so quickly after an unsuccessful survey in 2006 shows just how hopeless they consider the situation to be.

I remember the elation I felt over the purported find of the Ivory-billed woodpecker, and I still hold out hope it proves to be a solid find. Sadly, today is a day for the complete opposite feeling.

1001 Natural Wonders (First in a Series)

A few months ago we picked up one of those books that the zeitgeist seems to have dictated that Now is the time. This one is 1001 Natural Wonders You Must See Before You Die. These titles amuse me: imagine someone taking this so seriously that you begin to feel incomplete, way short of a complete list. Whatever will I do? Sell the house, give up the kids, all in a race to see everything on the list? What happens if I die and haven't ticked off all 1001? Will my obituary rather scoldingly comment on how poorly I did in my chase?

Well, knock my pathetic attempt all you want, but I'm going to list those few that I've managed to see. Not all at once, but I'll flip through the book and give them to you alphabetically over the next while, perhaps with little reviews.

Fist up: Hell's Gate here in BC. To be honest, I'm a bit surprised that this fits the category, but I suppose it's possible that I'm just jaded because I live so close. The canyon itself is indeed pretty spectacular, and the ride via gondola over the rapids is mighty cool. But it sits right beside the highway, and the gondola and the suspension bridge bring a sense of civilization to the place that, to be honest, disappoints. And yet, the fact that people are able to stop and see the Gate without risking life and limb probably means something to many folk.

Plus, the hummingbirds that hang around the buildings on the other side are always pretty cool.