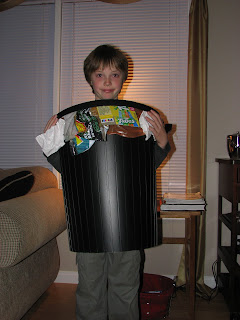 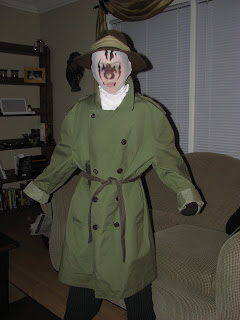 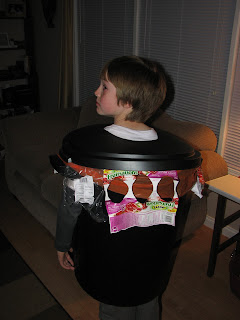 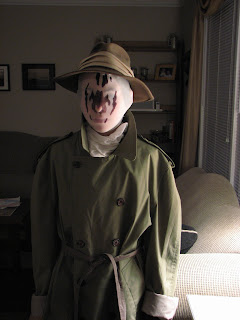 Since I'm out of town for Halloween, I can't be here to revel in the great costumes the kids have this year. And so I thought I'd better get them dressed up tonight and take some pix so that the world can see.


One is Brennan, Mr. Trashmouth himself, the other Aidan, who plays a somewhat crazy hero from a comic about to become a movie.


We're pretty happy with both of these costumes. A lot of work went into making them right. Jo says she may try to do some white face paint on Aidan to make him blend in more with the mask on the 31st, but tonight for the pic it didn't make sense to go to that trouble. We had bought more opaque tights, but they were a) too difficult to see through, and b) too tight, and squished his nose up to the side. I had also investigated finding kinky BDSM masks, but I didn't look too hard, to be honest. ("Could you repeat that, sir? You want this for your 12 year old? Sure thing. Just stay there for a few moments while I make a quick phone call.")

As for Brennan, he'll be wearing an orange jacket to go with the bag. Bonus for us, this was easier than the Zombie Michael Jackson or Zombie Elvis that Brennan originally wanted to be. Maybe next year.
// posted by Derryl Murphy @ 7:36 PM 2 Comments

I'm off to Calgary tomorrow for World Fantasy Convention, this trip in the midst of all sorts of angst about whether or not I should still be writing. Things are not going terribly well, although this weekend's trip will include the launch of Tesseracts 12, which opens with my story "Ancients of the Earth" (and which is reviewed for the first time here, partway down).

I intend to work the crowd as best as possible, talk with editors and agents, but I fear that this won't take me too far, largely because Calgary will not be attracting as many pros as WFCs run in American cities, especially in places close to major publishing centres (last year was in Saratoga, NY). In the meantime, Napier's Bones, my long-completed and once-almost-bought novel, still sits in limbo, ignored or held off by a large number, sadly rejected by a couple of others.

Couple all of that with a busy personal and work life in my new home and frustrated starts at various writing projects and I wonder sometimes if it isn't time to just pass on the whole affair. Sure, maybe a short story will come up every once in awhile, but perhaps I should just let it all go, maybe start again once I retire or, barring that, never.

But something is on the horizon that I've never tried before, something that might be worth giving a go before I make any permanent decision. November 1, this Saturday, is the start of NaNoWriMo, or National Novel Writing Month. I have to write over 1600 words per day, beginning with two days where I'm on the road. And dammit, I'm going to do my best.

All I have to do is figure out which project is the one. But starting this weekend (perhaps not until Sunday night, depending on whether or not I have internet access), I'll post updates here every day.

So for some reason I find myself coaching both Aidan and Brennan again this year. I had insisted that I would only be a co-coach or assistant coach for Brennan, since when we get out on the field he and I tend to butt heads. But, it wasn't to be; turned out that the club was having real difficulties getting even unqualified volunteers, and so in the end I stepped back to the plate.

They do things different here. The city has a number of clubs, and these clubs enter teams into a city-wife league. Our club is Aurora (it's based on where you live), which is the largest club in the city. In the four age groups - U18, U16, U14, and U12 - we have fielded 48 teams. These age groups are further divided, of course, into Boys and Girls, and then into Premier, Division II, Division III, and Division IV.

Neither boy stood a chance of making the Premier teams, in U14 for Aidan (Aurora Apollo) and U12 for Brennan (Aurora Jets), largely because the teams had to have their rosters set before open tryouts happened. Because we had just moved from out of town, both boys had to start with Div III tryouts, and Aidan went through a couple more rounds before he was ultimately relegated to Div III. Brennan came close to making the cut for an additional Div II tryout, but in the end also had to settle for III. Since it's a U12 league and he doesn't turn 10 until February, he understands this isn't a bad thing.

One of the things that's different here is that, as a coach, I actually had to draft players for my team, which meant we had to go and watch the boys play for a viewing. Each coach of course got to hang on to his own boy, and a few times if you drafted one player you had to get another (I, for instance, have twins on the Jets). But both times I got first draft, where we picked for 4 teams in the U14 and 3 in the U12. It was fun, but difficult, and I took a different plan to each draft.

With the Apollo, for instance, I know for a fact that in Aidan I have the best keeper in Aurora for this group (and maybe for Div II as well, since a combination of him being tight and unpracticed and coaches who didn't know him conspired to push him down), and so my first pick was a fast kid with good feet and a remarkably hard shot. And imagine my joy to find when my 2nd pick came, 8th overall, that the kid I rated the best defender on the pitch was still available. We're two games into the preseason now, and after having given up the first goal each game, we won 4-2 and 5-1. My top pick has only scored one goal in those two games, but he's causing the other teams all sorts of fits, and when they focus so much on him it leaves plenty of room for lots of other talented players. Bonus: I put this kid in goal for the second half of the second game, and he played well and even ran the ball out to past half to try and set up a play. And, Aidan scored a goal in his brief time out on forward (where he shows great footwork, incidentally, although he's not the fastest kid when he has the ball).

Brennan can play keeper as well, but his talents loom largest when he's out on the pitch. Defender, midfielder, forward, he's a threat no matter where he goes. For the Jets, my first pick was a keeper. I wasn't as sure about this team from the beginning, partly because I thought the talent pool I saw at the tryouts wasn't as deep (and yes, I'm accounting for age difference), and the first exhibition game was a tough 2-1 loss. But now we're into the regular season already, and the first game, in which we had precisely zero (0) subs, we won 4-1, and then tonight the boys absolutely manhandled their opponents, 13-0. Brennan scored 3 goals, and the boys I drafted to be keeper scored 4, to go with one he scored the other day. And yes, I did everything in my power to mix things up, putting defenders up front (where one promptly scored a hat trick), forwards in back, changed keepers, insisted that the boys pass more and more, but everything conspired against their opponents tonight. But the boys were gentlemen about things, and they seemed to understand my concern about making the other kids feel worse than they must have already.

I can't say that either team is going to go undefeated this year, but my goodness, it's nuts how lucky I've gotten, not just with the sheer talent of these kids, but also their willingness to listen and to buy into a system.

Children of the World

The Guardian UK has done an excellent photo essay in which they seek out a child from every country in the world who is now living in the UK, takes their picture (with a couple of exceptions) and prints what the kid has to say. I've been enjoying them, smiling at some, frowning at others, but when I came to Kwame from Ghana my heart just broke. Do go and read it all, but be prepared.

We vote this coming Tuesday, and while I understand many people are talking more and more about Harper's Conservatives perhaps not getting their majority government, I hesitate to believe it until I see it. It's nice to see people trying to do something about this, but the fear for me is that progressive voters sit on their butts because they feel like it's all going to pan out, or worse, because they feel there's no use.

For those of you who'd like to vote but are unsure how to make it work for you, check out Vote Strategic, which gives some geographic-specific advice on how to vote. You can also have a boo at Vote For Environment, which is pretty self-explanatory.

Those of you in the vast majority of Alberta, just go back to sleep. I suspect that a few two-by-fours and fire hydrants are running as Tories, and they will of course be voted in.

This one comes with a warning, since it has some explicit violence. Of course, the violence is in claymation, but it involves zombies and lots of guts and blood, and even a little nudge-nudge wink-wink. Sorta.