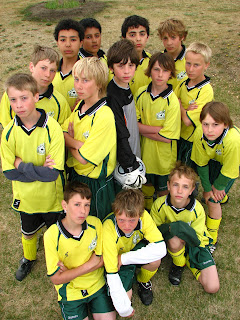 The Aurora Blaze, who won the Lakewood Kickstart tournament gold medal in their division this weekend. I'm the coach, and Aidan, in the middle with the grey jersey and the gloves, is the keeper. The results this weekend:

Game One - Lost 1-0 to the Aurora Bulls, on a bogus hand ball call that resulted in a penalty kick.

That meant we finished in 2nd place and therefore moved onto the semifinals, which ran Sunday morning. The Bulls, 1st place from our pool, faced the Hollandia Heat from the other pool, and we face the Al-Misbah Youth, the first place team from the same pool as the Heat.

Semifinal - The game finished 0-0. Most of the action was in their end, and there were probably a dozen corner kicks in our favour, but we couldn't put it away, once even beating the keeper but a defender getting in the way. On the other end, Aidan let one squib under his diving body, but our own defender was there to clear it away. And so it went to penalty kicks. The first kicker for us, Mido, put it firmly into the top left corner, then their first scored. Our second, Arsh, put it hard to the right, and then their guy kicked it right into Aidan's chest. A save! Aidan kicked third, and scored easily, then let in another. We were up 3-2 at this point. Ryan kicked 4th, and managed to squeeze it under their keeper's arm and body, and then Aidan read it perfectly, dove far to his right and knocked down the ball. We won, 4-2 in PKs, 1-0 official score.

Final - Hollandia Heat beat the Bulls, which was a surprise, but we were happy to face them. The final was 3-1 for us. Aidan was forced to make one huge save, lined up for a screamer that curled to his right on a perfect line for the top corner, but he managed to dive over and get his fingers on it to send it just wide of the post.

This is, I believe, the best team I've yet to coach.

So there was a gay rights parade in Moscow that was broken up by police, and I was quite taken with the Cyrillic name that is plopped quite prominently on the backs of some of the riot officers.

The Relationship Between Kirk and Spock

And no, I don't mean in the slash sense. Instead, here's a very good essay about how that relationship developed and what we see of the beginnings in the new and excellent Star Trek movie.

First, here's an article about digital "piracy" of books, which includes quotes from Le Guin, Ellison, King, and Doctorow. And ten second, an article about a new type of search engine about to drop, called WolframAlpha, which sounds to me like it has great potential.