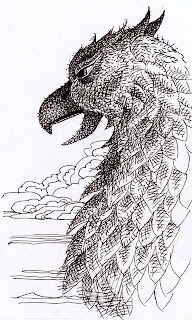 Martin has really gone to town on this, which I've greatly appreciated. Every time I think he's done, he sends along another sketch he's done, inspired by something else he's read in Napier's Bones. It's been quite thrilling to open all the new emails and see what he's sent this time.

This gryphon sketch was the last one he sent. There are others, but they are works that will be appearing in the hardcover, which, as usual, can be ordered here, although only until January 2. And because they're appearing in the book, I'd like to save that experience for the people who get that version.