In Which I Might Be Compared to Yes, or Genesis, or Perhaps Rush

Not online, of course, but I've managed to get my hands on a new (and mostly positive) review of Napier's Bones which ran in the new issue of Quill & Quire. Here are a couple choice quotes:

"...the book's true pleasure lies in how committed it is to its premise, continually unfolding new permutations..."

"...Napier's Bones is a consistently compelling and inventive read. Think of it as literary prog-rock, stretching the bounds of what is possible..."

He also thinks I do too much exposition, just like many a hard SF author, which is interesting, considering another review equated the book to both urban fantasy and hard SF.

It can't get any better than this. It really can't. This first part was just the header:

"Records show that you are among one of the individuals and organizations who are yet to receive their overdue payment from overseas which includes those of Lottery/Gambling, Contract and Inheritance. Through our Fraud Monitory Unit we have also noticed that over the past you have been transacting with some imposters and fraudsters who have been impersonating the likes of Prof. Soludo of the Central Bank Of Nigeria, Mr. Patrick Aziza, Anderson, Wallace Fred, none officials of Oceanic Bank, Zenith Banks, Kelvin Young of HSBC, Smith Williams, Daniel Wilson, Ibrahim Sule, Dr. Philip Morgan, Dr. Usman Shamsuddeen and some imposters claiming to be The Federal Bureau of Investigation."

And then this is the body:

The Federal Bureau of Investigation.

The Cyber Crime Division of the FBI gathered information from the Internet Crime Complaint Center (ICCC) formerly known as the Internet Fraud Complaint Center (IFCC) of how some people have lost outrageous sums of money to these imposters. As a result of this we hereby advice you to stop communication with any one not referred to you by us.We have negotiated with the Federal Ministry of Finance that your payment totaling 6.1million united stated dollars will be released to you via online banking system which means that an account will be setup in your name and the 6.1million united states dollars credited into it and there login name and password sent to you through via e-mail for you to assess the account online and make transfers online from the account to your local bank account We have been advised that this should be the only way in which you are to receive your payment because it’s more guaranteed and the best option, since over Fifteen billion us dollars was lost on fake checks last year 2010.

To redeem your funds you are hereby advised to contact the bank officer Mr. Donald Diedrich who will put you through as your account manager on the procedure to setup the online banking account for you and also you have to pay 300 us dollars to him for the bank logistics which is the normal process of setting up the online banking account and the bank where this account is going to be opened will be an International known bank.

Do contact Donald Diedrich the bank officer via his contact details above and furnish him with your details as listed below for the processing: 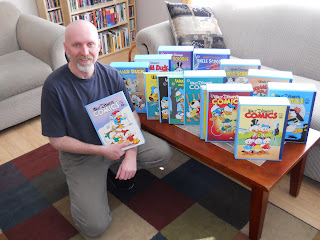 That's me holding the 2nd book of Volume X of my Carl Barks Library from Another Rainbow, along with the slipcases and books for all ten sets, three hardcovers per volume. I started collecting this when Volume I came out 1984, and just the other day finished it when I was finally able to get my hands on the elusive Volume X.
I was, obviously, a much younger man when these started coming out, and diligently set aside my money to make each purchase as it arrived. If memory serves, each one of the first nine sets was in the vicinity of $200. But then 1990 rolled around and, even though it was published, the final set never came to the store I used. In those pre-internet days, I had no idea what had happened, and searches for the books were always fruitless. But I always carried those other nine with me, no matter where I lived, hopeful that one day I'd be able to fill in the final blank.
In the past few years, I think I'd managed to find the books online three or four times, but I was always too late. And then I found it on eBay last year and promptly bid a nice, safe, high number. Which wasn't enough. So when I found it again this February, I made sure that the bid I put in was higher, beyond safe, and it turned out that even that was only about $15 higher than I needed. I'm not the only one who's been looking for this.
Here's my understanding: Another Rainbow was absolutely meticulous with this, doing a remarkable job of recreating all the covers, many of Barks' original oil paintings, scholarly and historical articles about Barks and his work, and all of his Duck stories (including some that needed re-creating or other work because of original editing or loss). But then, midway through putting the final volume together, Disney yanked the licence, and they had to rush it out. Some of the covers are poorly shot and color-controlled, and I would guess that the print run was probably smaller, although I don't have verification of that. I do find it interesting that Volume V in the link in the paragraph above this one is actually the most expensive set, aside from the one that was signed by Barks.
In my mind, the two greatest funny animal comic people of the 20th century were Walt Kelly, who did the strip Pogo, and Carl Barks, who not only drew the adventures of Donald Duck and his family, but created such iconic characters as Scrooge McDuck, the Beagle Boys, and Gyro Gearloose. Pogo was the strip (and yes, I know also a comic book, but the strip was better) and the Ducks were comic books. They were above everything else, and not just in funny animals. And now, finally, I've completed at least one small portion of what Barks did, and who thought it would have been almost as hard as trying to collect all of his originals?

I'll be in Toronto for Ad Astra from April 8-10, my first-ever visit to that convention, and my first con since San Jose's World Fantasy Con last October. I've received my programming schedule, which I gladly share with you here:

I hope to have further news about activities out that way very soon.

Yet Another Review of Napier's Bones

This one is print only, in the New York Review of Science Fiction, in the March issue which is apparently now out. My publisher has sent along the review, which the author, Alex Good, was kind enough to send along the unedited text. I'm thrilled, to say the least. I can't post it all here, obviously, but here are a couple, including the final line of the review, which is a killer of a pull quote:

"It takes a sure hand to make material like this work, and it is much to Murphy's credit that he manages to pull it off. In tone it's a lot different from the typical ChiZine dark fantasy, but the lighter touch is welcome here."

"The result is a clever lark full of free-wheeling adventure and odd intellectual borrowings; a sort of winking DaVinci Code for the math set bracketed in magic and uncertainty."

Hello? Is Anybody There?

Y'know, I remember the day when local papers took up the cause of local writers. Now? The paper here in town had a retirement and is between editors, and nobody else might ever be bothered to contact me about the book, even though I've talked to them and made it easy for them to at least interview me if they don't want to review it. And the same goes for cities where I used to live: I didn't expect much from the paper in Prince George, since it is a very small city, but there's been no response to my follow-up query. In Edmonton, where some of Napier's Bones takes place and where I not only lived but was an award-nominated SF critic for the one paper, that Books editor is away on holidays and I've been told nobody is making any decisions until he comes back. I am also told that they, like most other Postmedia papers, are outsourcing a lot their reviews, even to the US.

I can see now why publishers and writers are relying more and more on social media to get the word out. It's a frustrating thing.

I've written a piece about the process of editing for the blog Writer in Residence, and it can be found right here. Head on over, read it, maybe make a comment to show her that someone's paying attention and that it was worthwhile to bring me on.

Back in the Day

I remember being 13 or 14, sitting in Bruce Thomson's basement, when he ran his comic shop out of there, not yet in a proper store. Don Jessop and I were sitting there when Bob Klassen came downstairs with a box in his arms, saying, "Got it." Inside was Amazing Fantasy #15, and Spiderman #s 1-100, all in fabulous shape. I asked how much for the set and was told $1000, which was ridiculously far out of reach for me.

I say that because of a recent sale of that first appearance of Spidey.

Another Mention for Napier's Bones

As a precursor to an actual review going up at the Fantasy Book Critic, a smaller review from that person has shown up on GoodReads, and is a 5 Star notice for Napier's Bones. He calls it "a very entertaining mix of [science fiction] and [Urban Fantasy]" and a "positive surprise for 2011." Nice to see this, and to see the list of people piling up on GoodReads who want to read the book when it comes out.