Back in 1979, rock radio in Edmonton was dominated by 630 CHED, an AM station that introduced me to the vast majority of the music I listened to from the moment I became aware there was such a thing as rock and roll, until they were eventually pushed aside by the advent of FM AOR stations, such as (at the time) K-97. In addition to the music, I was also a contest fan, and liked to phone and chat with the DJs in between songs, request music, pontificate on whatever was going on in the biz, and more. It got so I knew the DJs quite well, and they knew me; sometimes we'd be chatting on the phone and the DJ would say to me, "Derryl, are you a fan of X?" (X being defined as a certain movie, or star, or band.) I'd say yes, and he'd tell me that they were about to give away a prize (album, screening passes, tickets to a concert) and that I should hang on the line and I would be lucky caller number seven. I also became an expert in fast dialing, and in timing my dials so the phone would start ringing the second they cleared the boards. This was no small feat when you consider I was using a rotary dial phone. It used to drive my parents and my sister nuts, because I would chase them off the phone or keep them away from it, and sometimes even hung up on friends of theirs who were rude enough to dial in just as I was about to dial out. But it worked well for me, and over the few years I did this I literally won thousands of dollars worth of prizes.

My biggest payday from CHED came on my 16th birthday, though, and required neither fast dialing skills nor a personal connection with anyone working at the station. Eddie Money was coming to town, and CHED was giving away a big prize that included two tickets to the show, backstage passes to meet the man himself, and some cash (more on all that soon). To win required filling out an entry form at a stereo shop downtown (I think it was Krazy Kelly's, but would welcome someone correcting me if I'm wrong), and then you had to listen to the radio for the DJ to call your name. If he did, you had six minutes and thirty seconds (clever, huh? See what they did there?) to call in and tell them you heard your name on the radio. If you did that, then your name was into the hat for a second time, for the big prize.

I dutifully went downtown on the bus and stupidly filled out one form and put it in the box. When I got home, my friend Don Jessop told me that he'd snagged about 80 forms and filled them out, then went back and put them in one at a time. It surprises me that I'd never thought to that, but next chance I got I headed downtown again, but fear of persecution for breaking some untold law meant I could only work up the nerve to grab 14 forms, which I filled out and then hurriedly snuck into the box.

Then I went home and began religiously listening to the radio. Which I already always did, so it wasn't much of a sacrifice.

I can't remember what I was doing, but I remember my little clock radio sitting on the bookshelf in my room and Len Thuessen coming on and announcing my name. I ran downstairs and grabbed the phone and called and said, "Hi Len! Guess who?" like the idiot I was. Len quite rightly said, "I don't know. You tell me." Once we cleared that up, my name was in the hat.

Side note. Even with 80-odd entry forms, Don never heard his name. My luck in those days sometimes made me quite insufferable, and I'm sure this was one of those times.

Forward a couple of days, to April 19, the day before my 16th birthday. The phone rings and my mom answers, then gives it to me ("It's some man," she said in something of a stage whisper). I knew the voice of the DJ as soon as he said my name. Yes, I was the winner. Yes, after this part of the call was done (they were recording it to play on the air in about 20 minutes time), they would give me all the details on who and where to meet. I told him that tomorrow, the day of the concert, was to be my 16th birthday, which he thought was pretty cool. And through it all my mom was standing there, making as many disbelieving-you're-being-spoofed-by-someone noises as any mother possibly can. And so I finally, and in immediate retrospect, embarrassingly, handed to phone over to my mother so that they could convince her this wasn't some scam. And of course all of that ended up on the air. The only good part is my mom was embarrassed as well.

Next day at school, everybody had to decency to not hassle me about the call, but instead they all congratulated me on winning.  Surprising to me, considering my state of mind all through high school, I managed to work up the nerve to ask a girl if she wanted to be my date. Cindy Weir said yes, and so that night we headed off to the Jubilee Auditorium where we met two CHED DJs (not easy to miss, since they were both wearing shiny silver jackets). They sat with us for the concert, which meant that everyone there knew I was the winner. I got lots of thumbs-up and congrats from people.

Long John Baldry opened the show, with a grand total of three songs. Which was too bad, because I was actually a Baldry fan. I'm happy to say that years later, shortly before he died, I met him and told him that, which amused him.

And then Eddie Money came out on stage. At the time I would guess he was on tour for his second album, but of course his big hits were "Baby Hold On" and "Two Tickets to Paradise." He put on a fun show, a lot of energy and a pretty tight band, as I recall. But I believe I also recall that the DJs hustled Cindy and me out of our seats before the gig was over and off we went to the green room.

I stood there, nervous as hell, and then, show over, a very sweaty Eddie Money walked in, smoking (if memory serves) a big doobie. He was introduced to me, shook my hand and wished me a happy birthday, the said, "Hey! This man needs a beer! Somebody get him a beer!" Just like that, I had a beer. I sat on a couch and Cindy sat beside me and talked to me until I stopped shaking.

Some more formalities were taken care of, and then Eddie presented me with an Eddie Money money clip (which was cool, but sadly it has gone missing in the fog of years) which held five crisp $100 bills (which, surprisingly, also went missing. I wonder how?).

This was, I think, the coolest 16th birthday I could have possibly had. I am not much for classic rock, and usually listen to more current music, but "Two Tickets to Paradise" is still on my iPod and it doesn't get old, which is a sign of good quality, I would think. Every once in awhile, I've thought of that day, but I had completely forgotten that a photographer had been present. But yesterday on the phone my dad informed me he'd found a couple of pictures in an old box. He scanned them for me and sent them along, and brought back a whole flood of memories.

I can't recall all the people in this photo. There are hangers-on and probably a publicist, and the two DJs. I'm the goofy-looking kid in the middle, holding the wad of cash. On my left is Cindy, hands clasped and apparently guarding her purse with her life. And to my right, arm over my shoulder and still smoking (although at this point I'm pretty sure this is regular old tobacco) is Eddie Money.

He treated me well that night. I wish I'd been more on the ball and less freaked out by my situation. It would have been cool to have had more of real conversation with the man, instead of sounding like a star-struck lunkhead. 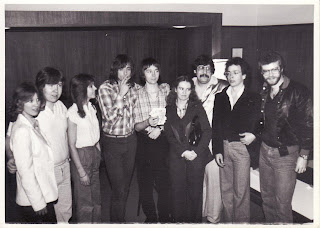 Comments:
Oy. I was just knocked over by a wave of nostalgia.