The Boys at Track and Field Day 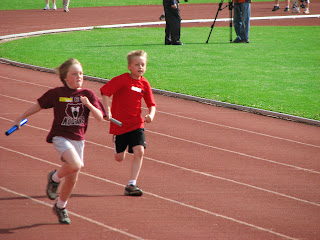 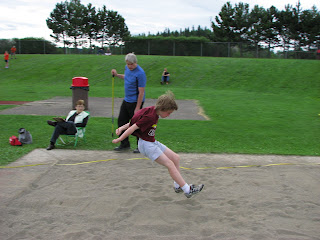 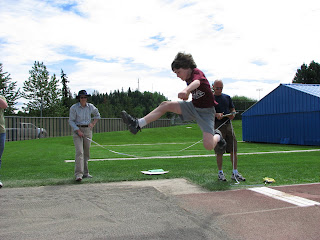 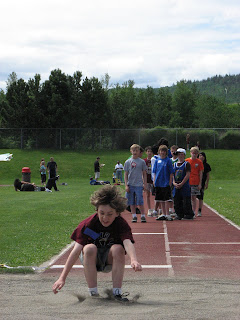 Triple jump had been my "specialty" when I was in school, and so I've spent the past few weeks coaching Brennan on technique, as well as giving Aidan as much input as I can on long jump. Therefore, it came as no surprise to me when Aidan won his competition with a jump of 3.53m, 11cm longer than 2nd, and Brennan won with a jump of 6.11m, which was a whopping 53cm longer than his closest follower. What did surprise me was that Brennan's jump was shorter than what he'd been managing in our backyard, without a sand pit to jump into.

Later in the day, I was helping two of Aidan's classmates with their jumping, and one of them had chosen to start his jump from a board that was further from the pit than what the teacher in charge was recommending. This made sense to me, as the closer board was so close that any child who knew how to stretch out the step part of the hop, step and jump would end up stepping into the pit (or at least right to the very edge) and would therefore have a shorter jump. But both boys managed jumps long enough to put them into 2nd and 3rd (with 7.08 and 7.00m), but they had to wait for one more boy who was just coming over from the 100m final (where he beat Aidan). That boy managed to reel off a 7.21m jump, and once it was settled they all headed off for their ribbons.

I asked the teacher in charge if Brennan could try one more time, just for fun, from the further board. He said yes, and so Brennan tried another jump, which wasn't so good, and then Aidan ran in with another long jump. And then they both tried again, and here's where it gets good. Aidan's long jump was 3.6m, which meant a personal best and another 7cm on top of what he'd done earlier in the day.

And then Brennan jumped. The teacher made the measurement, then muttered "That can't be right" and turned the tape measure over and looked to make sure that the start of it was at the board. I asked what it said, and his answer almost made my eyes pop out: 7.60m. A 9-year-old in grade 3 had jumped almost 40cm further than the best grade 6 competitor, and well over a meter further than I had thought he was capable.

We'll find a track and field club when we move to Saskatoon.