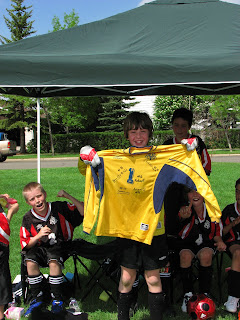 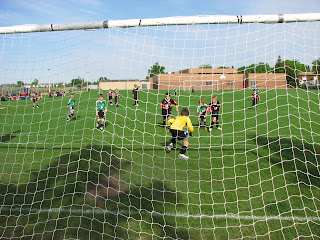 As mentioned elsewhere, we were in Edmonton this last weekend for the third of three soccer tournaments for Aidan's team. In Burnaby they played three games and got hammered all three times, and in Kamloops they won one, got smoked in another, and lost a tight one. In Edmonton, the pattern looked to repeat itself, with a tie (leading 2-0 with ten minutes, the boys fell asleep) followed by a 12-0 scorching by a team I remember well from when I was a kid, since I still sport burn marks from every time we played them.

But next day at breakfast I asked Aidan how he felt that day, and his response was "I feel like stopping shots." And true to his word, he got two clean sheets that day, a 5-0 win and a 3-0 win. Since there were five teams in their group, there were no gold medal or bronze medal games, and instead points decided placement. If a team was tied on points, then the next decider would be goal differential. Obviously the team that walloped Aidan placed first (they gave up one goal all weekend), but we had the same number of wins, losses and ties as the team we had tied on Saturday morning.

However. While these teams get one point for a tie and three for a win, they also get a bonus point for every shutout. And so, while the other team had a better goal differential, we had one more shutout than them, and so took the silver.

This being Aidan's last game with the team, seeing how we're skipping town and all, the coaches went and got him a special keeper's jersey and had all the kids sign it, which you can see him proudly demonstrating up above. He's going to miss that team and those boys.

Comments:
That post choked me up; there's nothing better than peer validation- whether you are a soccer keeper or a writer... or even a stay-at-home-mom knee deep in laundry and Vim Cleaner. Way to go!!!