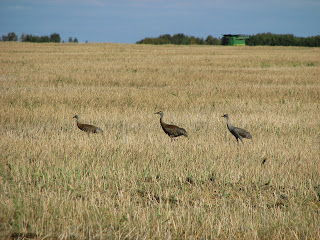 Well, we're mostly settled in to the new digs, although I've been having ongoing computer problems, which means the laptop doesn't go online anymore and the desktop has seizures every once in awhile. All of which is my excuse for why I've been quiet lately. I'll see if I can fix that.
Anyhow, on Saturday we took a drive east of here, along Highway 16 towards the Quill Lakes (Big and Little). There was an interpretive center listed on the map, smack dab between the two lakes, and it turned out that the road leading there was all gravel. Along the way we saw six Sandhill cranes in a farmer's field, which made it all worthwhile right there, which is a good thing, because it turns out that the map was wrong, and that the center had been shut down ages ago. Which we found out by not seeing it at all and coming out the other end on Highway 5, right by the town of Quill Lake.
A visit to the local diner clued us in, but also brought a suggestion we travel a little further east to Wadena, and a bird sanctuary that was nearby. We did so, and it was well worth the time. We had the place all to ourselves, and during our walk we saw a flock of Wilson's snipes (a first for Aidan and me), snow geese, mallards, coots, plovers, a Northern Harrier, Marsh wrens, various blackbirds, another Sandhill crane, a muskrat, two garter snakes (one dead), a Boreal Chorus frog, and loads of interesting insects.
We intend to visit more birding locales. It's Aidan's ultimate goal in life to see a Whooping crane in the wild, and while it's no small feat, it's certainly more likely here than back in Prince George.