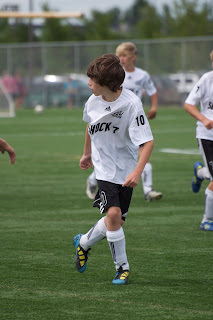 As I may have mentioned around here before, this outdoor season Aidan was playing for the Aurora Diablo of the SPSL (Saskatchewan Premier Soccer League) They had a remarkable season, going 11 wins, no losses, and 1 draw during the regular season. They had a few close calls, but a good team always finds ways to win, I believe, and these boys did. The lone blemish was their last game of the season, when they allowed a late goal for a final score of 1-1.

There were six teams in the league, three here in Saskatoon, three in Regina, and one in Prince Albert. The boys played home and away to each, which meant some travel during the season. This level of play also required a lot more commitment than most of the boys were used to, including four 1.5 hour practices this past week alone.

Today was the provincial championship. Unlike BC (where friends of Aidan's from when we lived in Prince George recently competed unsuccessfully in their own provincials), there is no round robin here. Instead, it's a 1st vs 2nd showdown, winner take all. And so the Diablo went into today facing REU Ginga from Regina, who went 10-2-2 on the season, their only two losses coming against Aidan's team, 3-2 home and then 6-1 away.

REU started with the ball, but Diablo stripped them of the ball and Aidan's teammate Austin scored at the 20 second mark. By the half they had a 3-0 lead, and probably should have had more. There were some minor blips in the game, short periods of time when REU put on some pressure, but in the end it was obvious which was the stronger team, and the game finished 6-2.

That's the end of a great season, but only kind of. In October, Aidan's team will travel across the country to Moncton, NB, for the Canadian club nationals. They'll be in tough, against teams from across the country, some of them having played together for a good long time. And we're all in tough, as well, since there will be a significant amount of fund-raising involved (I've heard estimates that we may need to raise as much as $30,000, which is not small change). But it'll be worth it; an experience like this may indeed be once in a lifetime for Aidan, and he needs to reach out and grab it while he can.