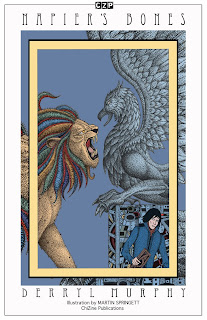 This is the poster that Eileen has won (give or take any last-minute tweaks that Martin performs). It is also the colour frontispiece art for the limited hardcover edition.

We Have Some Winners!

The numbers have been tallied, and after some adding and subtracting of those same numbers, I've arrived at the list of winners for the Napier's Bones contest. The nice surprise for me was how many people came very close to picking the right number. While some I could dismiss right away, I actually had to go back and make sure about who was closer in several cases, at least twice for each prize.

I'll send an email to each of the winners, but the announcement goes up here first. And so, after inserting the obligatory drum roll:

3rd Prize - The winner of the poster, signed by Martin Springett and me, is Eileen Bell. My number was 1646, and Eileen picked 1630.

2nd Prize - The winner of the trade paperback, signed by me, is Winnifred Smit. My number was 1986, and Winnifred picked 1973.

1st Prize - And the big winner of the signed and numbered hardcover is Charity Fraser. My number was 697, and Charity picked 765.

Congratulations to all of the winners. You'll hear from me probably before you see this post, and soon you'll see your prizes. And thanks again to everyone who entered.

Just got word that Atlanta Nights by author Travis Tea (say it out loud) has been optioned for a film, kind of a documentary coupled with some dramatizations. The money will go to SFWA's Emergency Medical Fund. Wanting to know about the famed Atlanta Nights? Read about it here.

And you can hear a "dramatic" reading of my chapter here.

I'll note that my chapter is a little more tame than many of the others. I was writing it so it would be bad but not insanely so, and out of sync with what was happening elsewhere in the book. Some other authors went a little more nuts, and more power to them, says I.

People Are the Same the World Over

For those of you who have yet to read Napier's Bones, I won't give away too much but wanted to mention something related to a scene in the book. There is a point where our heroes go to a little place called Seil Island, and while there they have an encounter with a badger. Beyond that I'll say nothing.

I've been to Seil Island, specifically to visit a place called the Ballachuan Hazelwood, which was the absolute highlight of my trip, a forest that has probably existed since the island was first settled after the first ice age. And while I didn't see any badgers while there, I did know that they were living on the island.

So imagine my despair to discover that in 2007 it was announced that the species had been extirpated on the island, and that authorities believed that someone had been gassing the badgers to death over a number of years. There had been about forty of the animals living on the island, and some of their setts had been there for hundreds of years.

Think about that. A small mammal, whose home has been built and enlarged by successive generations for a longer period of time than the place where I live has been a city. And then some jackass comes along and wipes them all out.

I weep for the future of us all.

Is there a better phrase in the English language today? I think not.

And let me just add that this explains why Jo always laughs at me before we enjoy conjugal relations. Yeah, that's it...

On Facebook I had recently made some noises about having some sort of contest so that somebody could win some cool Napier's Bones-related swag, but I had to put my brain to the grindstone to figure out exactly how I wanted to do this. That's all done now, and it's time to start this contest.

But first, let me announce what you can win:

First Prize - A signed, limited edition hardcover of Napier's Bones. This glorious edition contains a colour frontispiece and some internal black and white art by Martin Springett, as well as signatures by me, Martin, cover artist Erik Mohr, and book designer Corey Beep.

Second Prize - A trade paperback copy of Napier's Bones, signed by me.

Third Prize - A poster for Napier's Bones of Martin's colour frontispiece, signed by Martin and by me.

I will handle the mailing costs to anywhere in the world, but am not responsible for our respective postal services doing Something Stupid.

In conjunction with the mathematical fantasy nature of the novel, I want you to pick a number, anywhere from (and including) 0 (Zero) to 2011 (two thousand eleven). You may then post that number in one of three places:

- on my blog, in the comments for this contest announcement. Please make sure you've left your email address or else check back on February 23rd for the announcement.

- on my Facebook page, in the comments of this Note

- on Twitter. If using Twitter, you must use the hashtag #napiersbones, in order for me to be able to find your entry. Simply type your number and the hashtag, ie

(note that I chose a number outside of the range)

Speaking of Twitter, you can follow me there @derrylm. Nothing extraordinarily scintillating, but as events for the book begin to unfold, I suspect I will be able to update there more frequently.

Entries will be accepted until February 22/2011.

Anyone can enter, except for employees of ChiZine Publications and their immediate families, as well as my own immediate family, and that of my wife.

You are allowed one entry per format. One for the blog, one for Facebook, one for Twitter. Make sure you choose a different number for each place. If by some bizarre set of circumstances someone actually tries to spoof this contest with bots, I reserve the right to shut it down early.

If the number is not chosen, the closest guess will be the winner. If two or more are potential winners, I will draw the winner's name from a hat. Guesses equidistant from the right number will qualify, whether they are higher or lower, excepting those numbers that fall out of the range.

Spread the word! The more the merrier, and the odds are better than the lotto.